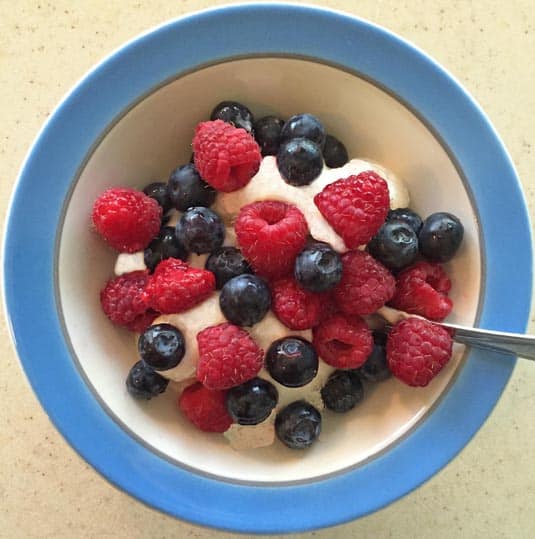 I’ll never forget the first time I tried Greek yogurt. We were visiting my aunt and uncle at their beautiful home on the Chesapeake Bay, and each morning Aunt Sara would lay out a big breakfast buffet in the kitchen. One morning she put out a big container of FAGE Greek yogurt, and I was completely hooked at the first bite.

However, it also costs substantially more than regular yogurt—a 32 ounce container of FAGE is $7.49 at my grocery store, and it’s not organic—which is why I decided to try and make some myself here at the urban homestead. I spent $2.69 for organic milk and 99 cents for a container of plain organic yogurt to use as starter (I already had cheesecloth) so I saved over 50 per cent—and produced an organic product, to boot.

When I make the next batch, I’ll use 2 tablespoons of the yogurt from this batch for the starter so the cost will be even less. This project was one of my most successful culinary experiments, and if you’re a fan of Greek yogurt you’re going to love making your own.

After some online research, I mostly followed the basic yogurt recipe in the Joy of Cooking cookbook. I started a batch before we went to bed last night, and awoke to fresh yogurt; it was almost as exciting as Christmas morning! 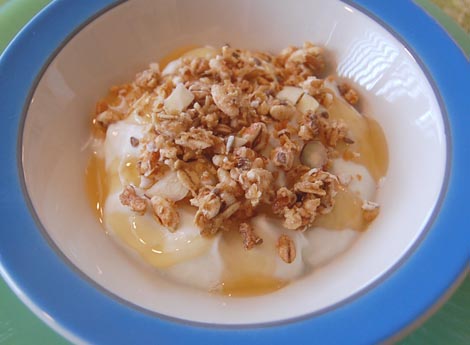 Here’s all you need to make 32 ounces of your own fantastic, creamy, thickened yogurt:

*I prefer to prepare this recipe with organic milk, which is produced without any synthetic chemicals, hormones or antibiotics. (Antibiotics can interfere with the yogurt-making process.) If your grocery story has a bargain section in the dairy case, check for organic milk. It’s often on sale there at my store, so the cost savings is even greater. If you’re using non-organic milk, for best results try to use regular pasteurized milk rather than ultra-pasteurized. The higher the fat content in the milk you use, the creamier your yogurt will be.

To begin, pour 2 tablespoons milk in a small dish and reserve. Pour the rest of the milk into a double boiler or heavy-bottomed pan and turn the heat to medium. If using a double boiler, cover the milk. If the pot is directly on the burner, stir it and watch it very, very carefully so you don’t burn the bottom. 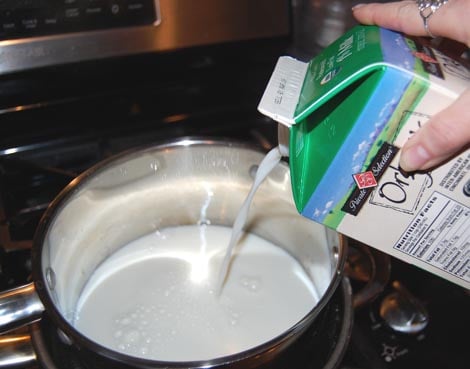 Heat the milk to 180 degrees F. It helps to have a candy thermometer so you can carefully watch the temperature, but when I went to fetch mine I remembered that the kids broke it the last time they made frosting so I used an instant-read thermometer instead.

Immediately remove the pot from the stove and carefully pour the hot milk into a glass or ceramic bowl or casserole dish. Put the dish on a cooling rack uncovered, and let the milk cool to between 105 and 110 degrees F. In our kitchen, this took about 50 minutes. (Note: remember to leave the dish completely uncovered at this stage, so the good bacteria from the air can start working their magic!)

While you’re waiting for the milk to cool, turn on your oven to the “warm” or “proof” setting. If your oven doesn’t have that setting, turn it to 150 degrees F. Combine the 2 tablespoons of milk you saved with the prepared yogurt in a small bowl and reserve. Resist the temptation to add more than 3 tablespoons yogurt. According to the Joy of Cooking, “you may wonder why so little starter is used and think that a little more will give a better result. It won’t. The bacillus, if crowded, gives a sour, watery product.” I used 2 1/2 level tablespoons of prepared yogurt and the resulting yogurt was thick, mild and creamy.

Once the milk has cooled to between 105 and 110 degrees, add in the yogurt-milk mixture and stir well to combine. (Don’t forget this important step.) Put the lid on the casserole and cover it with a dishtowel.

Leave the yogurt undisturbed for 7 or 8 hours, or overnight.

In the morning, carefully take the dish out, unwrap it and remove the lid, and check to see whether the milk has turned to yogurt. After eight hours, this is how our yogurt looks:

If your batch isn’t quite thickened, return it to the oven and check on it again in an hour. Once the yogurt is sufficiently thickened, you can stop at this stage if you want regular yogurt. Just stir the mixture and refrigerate it; you may need to pour off a little of the watery liquid. Don’t forget to turn off the light in your oven!

For creamy Greek yogurt, refrigerate the yogurt for at least three hours to allow it to completely cool and thicken. Line a large strainer with four layers of damp cheesecloth and find a bowl that the strainer will fit inside: 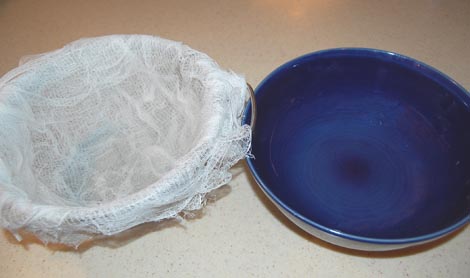 Put the strainer inside the bowl and pour the yogurt in; refrigerate for one hour. Pour out the liquid that has accumulated in the bottom of the bowl; this is the whey – that’s right, the very same delicacy Little Miss Muffet ate while she was sitting on her tuffet. You can save the whey and use it for cooking (a common use is as a liquid in homemade bread recipes) or discard it. Return the bowl to the refrigerator for one more hour, strain the liquid again and the yogurt should now look thick and creamy – like this:

Spoon it into a container and refrigerate it, tightly covered, for up to six days. 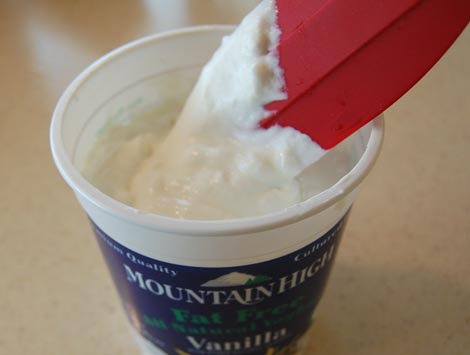 I find most store-bought plain yogurt is a little too tart for my liking, but you’ll discover that this homemade yogurt has a very mild flavor. You can enjoy it as is, add some fresh fruit or jam, or do what we did and serve it with raw wildflower honey (we love Colorado-based Madhava Honey) and homemade granola.

Remember to save a couple of tablespoons of your homemade yogurt so you can use it as starter for the next batch!

After many successful batches of homemade yogurt, I recently had a big FAIL. The only thing I’d done differently was to use our smaller, upper oven to incubate the yogurt instead of the lower oven I usually use. When I pulled the yogurt out the next morning it hadn’t thickened at all; it was simply a big bowl of warm milk. I was so disappointed! At first I suspected the milk, because I’d used the big-name brand of organic milk that is known to be ultra-pasteurized. But when I measured the temperature of the milk, it was 130 degrees – too hot.

I decided to experiment with the failed batch, and let the milk cool back to 110 degrees. Then I added 2 more tablespoons of yogurt mixed with 1 tablespoon of milk. (My thinking was that the too-high temperature had killed the live cultures from the previously-added yogurt.) I wrapped the bowl in a towel, put it in the lower oven with the oven light on, and let it be for 8 hours.

When I opened the lid, I was amazed to see that the batch was thick and creamy. In fact, it was one of the thickest batches I’ve ever made. The consistency was a little sticky, but after I strained the yogurt it was fine. So if you ever have a batch that fails, you may want to try again and try to find the right spot where you can keep the yogurt at that ideal temperature of about 110 degrees F. If your oven light doesn’t emit any heat, you can alternately put the towel-covered dish on a heating pad set on “low,” or put it in a cooler with a snug-fitting lid and several jars of hot water to maintain the heat. Good luck!

P.S. If you liked making your own Greek Yogurt, you might also enjoy this Homemade Ricotta Cheese Recipe.

433 thoughts on “Make Your Own Homemade Greek Yogurt”