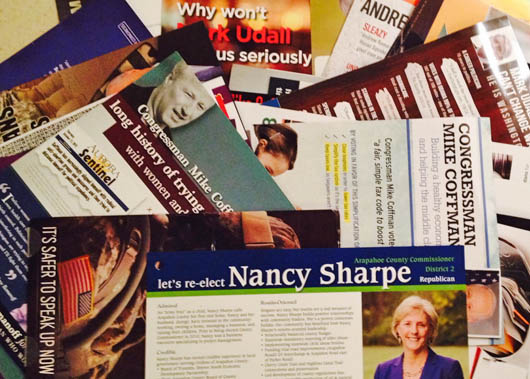 I decided to save the paper political flyers we received leading up to this election. A quick count reveals that 89 brochures and postcards landed in our mailbox and on our front door.

In my neighborhood we have 600 homes, so just in our square mile we probably received about 54,000 pieces of propaganda. Think of the trees cut to promote candidates and issues this year — the environmental impact of our election process is staggering.

A measure that was dear to my heart was the passage of Proposition 105, an amendment to label GMO foods. Early returns indicate that the measure was defeated.

Three of the 89 mailers we received were slick, four-page color brochures from No on 105. 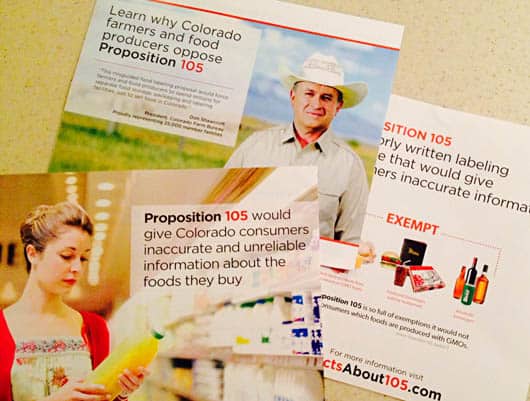 We didn’t receive anything from the pro-GMO labeling camp. That’s not surprising, given that we were outspent on this campaign by 20 to 1. I contributed $25 to the Right to Know Colorado campaign, but it takes a lot of moms sending $25 to equal the $16 million dollars that Monsanto and other biotech and agribusiness opponents spent to defeat this measure in Colorado.

We’re now seeing the result of the U.S. Supreme Court’s unpopular (and wrongly-named) “Citizens United” decision four years ago to remove barriers to corporate spending during elections. You may recall the furor over the court’s “corporate personhood” ruling. Eighty percent of us opposed the decision — with rare, nearly-equal bipartisan agreement from Republicans and Democrats both.

The aftermath of those open floodgates is not pretty. Do you know anyone who’s not weary of the awful barrage of attack ads, robo-calls and politicized misinformation? Just think — we have another presidential election to look forward to in 2016.

Now that Pandora’s Box has been opened, we can be assured that the politicians, wealthy donors, big corporations, and media companies that benefit from all the ad spending will be completely unmotivated to overturn the Citizens United ruling.

What can a frustrated, concerned citizen do? The answer is simple:  we need to make an organized, grassroots effort to enact campaign finance reform. Groups like People for the American Way and Move to Amend  joined forces and delivered a petition with 3.2 million reform supporter signatures to Capitol Hill in September. Sixteen states have already passed resolutions to overturn Citizens United.

Campaign finance reform is the only way to restore democracy to our political process here in the United States, and we may all need to get involved on some level to make our voices heard.

What do you think?