I’m remembering our grandmother today, on her birthday.

Eliza Gracie Weeks Seely was born on September 19, 1907 and lived to be 99 years old. During her lifetime she experienced the Great Depression, World War I and II, and the attacks of 9/11.

Theodore Roosevelt was president when she was born, and 16 more presidents served during her lifetime—all the way through to George W. Bush.

She attended Boston Bouvé College and earned her degree in Physical Education. Nanny married Poppy—our grandfather Fred Seely—in 1935. When I think of the good marriages I admire, theirs is at the top of the list.

My impression was that they were best friends, lovers, and partners in the truest sense of the word. They both loved to laugh and have fun, and they shared such affection! I can still remember catching Poppy playfully pinching her bottom as she leaned over the dishwasher one morning.

Nanny wrote the most wonderful letters, and it was always a joy to find an envelope from her in the mailbox. I saved many of her letters and cards, and I’m so glad I did. Re-reading her words now brings back so many wonderful memories. 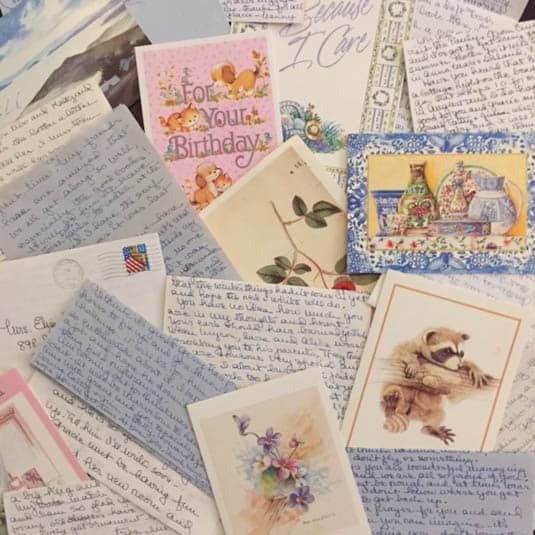 Our grandparents were very active, and Nanny’s letters often contained stories about their latest adventures:

“Last night Poppy and I went up to the Blue Ridge Mountains with friends and had a real touch of nostalgia listening to a wonderful concert under the stars – all of Cole Porter’s golden oldies – big band tunes and scores from so many of the New York shows we saw when we lived in New Jersey. The moon helped light our way down the mountains and we were all glad we had gotten reserved seats, for there were close to 2,000 in the big outdoor auditorium.”

Sometimes her letters contained family stories, like this one she shared about my mom, Betty, during the time they lived in California when Poppy was stationed there during World War II:

“I’m sorry Gracie had chicken pox, and I hope by now the meanest part is over. Betty had it when we moved to California during the war and there was no doctor in the whole area of Balboa. She was miserable, and the Navy officers that commuted to the base with Poppy were scared they would catch it. Sure enough, one did!”

My grandparents were married for 55 years before Poppy died in 1990. Nanny wrote me a letter not long after, describing a poignant moment:

“You would have been proud of me last evening, for there was a giant (200 people) sit-down cocktail buffet here at The Downs and I was dragging my heels, hating to go all by myself. But I could almost hear Poppy saying, “Go on—and wear that new dress I bought you.” So I flapped around and got all dressed up in the peach dress.

“As I drove out of the garage, I realized I didn’t have the house key—I’d locked myself out! That didn’t add to my state of mind, but I went along and as I looked at that horde of people someone waved and said, ‘Hey! Liza!’ Two wonderful words that made my evening, and my nice next-door neighbor let me in when I got home. So now, I’ve climbed that mountain and next time won’t be such a big deal.”

As her letters drew to a close, Nanny’s script got smaller and her spacing became tighter as she tried to fit in a few extra lines. Sometimes her writing got so small on the last page that there was only enough room at the bottom of the page for her to squeeze in a tiny “Love and a big fat kiss, Nanny.”

I’m so grateful that Nanny took the time to write the letters I so treasure now. In this day of email, texts and instant messaging, she inspires me to do the same.

Hugs to all of you, and enjoy the weekend,

12 thoughts on “Precious Letters from Nanny”